The Ballad of Oscar Lopez Rivera 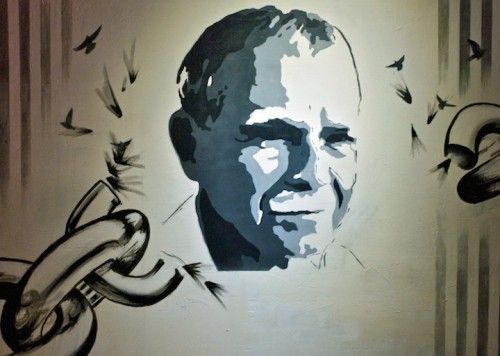 The Puerto Rican/Boricua People have been engaged in an anti-colonial resistance and liberation struggle for over 500 years, first against the Spanish, and than (for the past one-hundred-and-twenty-plus-years) against the United States of America....

Captured and charged on Aug 11, 1981, political prisoner (and prisoner of war), Oscar Lopez Rivera spent 36 years in a US prison, charged with sedition ("conduct or speech inciting people to rebel against the authority of a state or monarch") for attempting to liberate his homeland, Puerto Rico from US colonialism. He was pardoned by US President Barack Obama in 2017.

Oscar Lopez Rivera was/is the inspiration for ABRAZOS ARMY'S salseditious song, entitled The Ballad of Oscar Lopez Rivera, which we originally released when Oscar was finally released. The track talks about Oscar's life growing up in Chicago, serving as a Soldier in the US military during the so called Vietnam war, going underground as a member of the Fuerzas Armadas de Liberacion Nacional (who were trying to liberate Puerto Rico and free Boricua minds through the use of armed action and agit-propaganda), and finally, his arrest and imprisonment, all in about four and a half minutes of lyrics and music.

While writing the words to the song, I thought a lot about the old saying "one mans terrorist is another mans revolutionary," and how very few know even very little about the Puerto Rican peoples anti-colonial struggle and next to nothing about the Puerto Rican peoples right to (according to the United Nations) "self determination" and their/our right to "freely determine political status and freely pursue economic, social and cultural development." Or, as Bob Marley put it, "every man gotta right to decide his own destiny." And that includes Puerto Ricans! Essentially we got a right to be FREE (and equal) as a people and as a (free) nation (which we currently ain't)!

while singing this simple song, I hoped to give a bit of background (and hopefully a degree of understanding/empathy) as to what makes an Oscar Lopez Rivera (or a Nelson Mandela, Lolita Lebron, Rafael Cancel Miranda, Huey Newton, Filiberto Ojeda Rios) and many others who dare to dream and risk their freedom (and their very lives!) to free they gente (by (m)any means necessary)!

Currently, other long time anti-colonial/anti-oppression/anti-injustice fighters for the cause of freedom, such as Leonard Peltier, Sundiata Acoli, Russell 'Maroon' Shoatze, Mumia Abu Jamal and Jamil Abdullah Al-Amin (aka H. Rap Brown) still languish in US prisons, while others such as Assata Shakur and William Morales remain in exile, cast out of the countries of their birth.

Hopefully, after listening (and maybe dancing!) to this ballad, you will have a deeper understanding of anti-colonial/anti-imperial struggle and Puerto Rican/indigenous resistance, and what the Puerto Rican/Boricua people have endured, resisted and risen above (and within) every day for centuries with no end in sight.