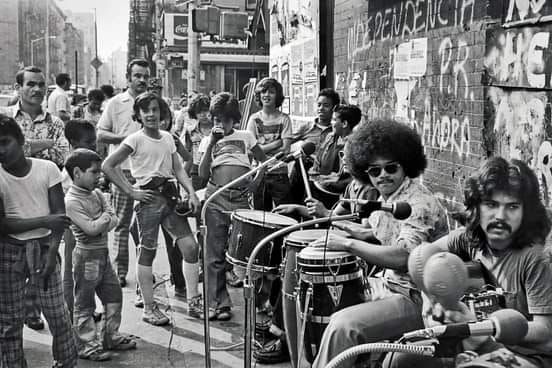 “Street music is always good even if it is bad, because actually there is only one melody over there: The melody of life struggle of a poor man!”  ― Mehmet Murat ildan

"The gray steel streets were indeed paltry (not our feelings, and no, not the blues) but those gray streets were dead and cold, despite our warm living selves celebrating the life in us dancing across their surfaces." ― Amiri Baraka

Doesn't matter where ya come from if you don't know where ya been... Huey Newton said that "youths are passed through schools that don't teach, then forced to search for jobs that don't exist and finally left stranded in the street to stare at the glamorous lives advertised around them," James Baldwin stated that "the American streets resembled nothing so much as one vast, howling, unprecedented orphanage," Oscar Wilde believed that "Art is not to be taught in Academies... The real schools should be the streets." and Nas declared that "Hip-hop is the streets... It's blunt. It's raw, straight off the street." Currently there are an estimated 58,089 homeless people in New York City and each night thousands sleep on New York City streets and in the subways. To paraphrase Bob Dylan, nobody ever teaches you how to live out in the street, you simply find (in more ways than just one) yourself there (wherever there is), on the street and in the streets, and you manage (or don't), survive (or won't), thrive (or can't) or die (for sure!)... No more and maybe less. There are many ways to survive the streets; many are extra/ill-legal and most are dangerous and can get you locked up or for better or worse, killed either by a cop or another street struggler... My days on the streets of Nueva Yo', I survived by singing for my supper... Sometimes I went out into the streets or down into the subways with my compa, Kid Lucky, a beatboxer/rhymer, and sometimes by my lonesome, doing the acapela thang... Sometimes by the end of the day, I made just enough for some rice and beans (and tostones if I was lucky) and sometimes just enough for a dollar slice of pizza. I always preferred to perform in my own stomping grounds; the Boogie Down/el Bronx, El Barrio/East Harlem, Loisaida/Lower East Side of Manhattan, but if you busked in the tourists areas of the shitty or at the subway stations that tourists frequented, and could convince the tourreristas that what they were witnessing/hearing was authentic keeping it "real" New York Hip Hop, you could get a more sizeable "donation" out of em. But you never really knew if you would make enough to eat that day or to pay for a place to sleep that night (if you slept at all), or would end up riding back and forth on the subway train, tryna sleep with one eye open (for safety), and without a "hit" it was usually miss and you were at the worst, condemned to perish from this earth like a piece of trash left in the gutter and at "best," sleep in the park or on a rooftop or on the church steps with Jezuz as your only security blanket. Paul Simon said, "the words of the prophets are written on the subway walls..." and they say the streets is watching, but i often wonder if them streets (and subways) is even listening...