WE BE HARDER THAN A HURRICANE 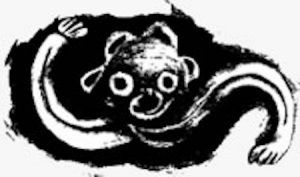 "My armor is like tenfold shields, my teeth are swords, my claws spears, the shock of my tail a thunderbolt, my wings a hurricane, and my breath death!" - J.R.R. Tolkien

Once upon upon (another) time, some time before this time, there was a time and a place that was i-land and there was a people, brown like the truth as earth and black like deep nights clearest sky and red like the reality of the sun. Without weapons and without laws, they owned nothing, but were rich in everything. The word poor was of a foreign tongue and that tongue was forked, twisted, while their mouth was a straight path to truth, their word sounded-like freedom. We will call them Taino(and later Afro-Taino) though they probably called themselves something else. They praised/prayed to no one but the very land itself that provided sustenance for them and theirs. They ate, drank, played, loved, laughed, slept, sang, dreamt, all in real time (all the time). They worshipped life in its essence, naked as their mother (earth) bore them in beauty, transcendent reality of their surroundings. They breathed in the air, plentiful, clean, deep, free, and breathed out the same, but clothed in invisible visions and draped in waking dreams, drenched in life itself. They were something we can no longer define within our capitalized/co-opted/co-modified/conquered and colonized mind (set). They were something we could not keep. Something called free.

Which may have been what they called themselves be-fore the conquerors came carrying cold steel and craven intentions. The new “masters” re-named these free beings, through force of arms, guns, (their) gods and greed. They called and christened them (un)civilized, culture-less, chaos, savage, shame-full, primitive, Po' Rican beast of burden, and slew and/or enslaved them all, except those who could/would fight and run away and live to fight another day. But those who couldn’t/didn’t were tossed into the mines along with their minds and made to work the killing fields until they were dead/tired. They were infected with the (new) states dis-eases, beaten, battered, bitten (but not broken) and driven (in)to suicide or a state of Cimarron. The enemy waged war against the (new/old) world, so the free ones called for Guazabara(!) against the govern-mint!

lacking hue-man-made weapons of steely sharp stealth and stench, they brandished bright sunlight struggle and ancient natures natural-ness, intellect as arms, they fought with fist and feet, arrows and aims, finding a new way with Taino-tenets and Moores-mores, mind machetes ‘till freedom or death y hasta la Victoria…. Siempre seditious, autonomous, angry. Most died (and all were re-born) but many (simply) lived and became new (again) and again(st), as cane cutters straight out the Congo and headhunter Jibaro’s from the (h)ills, field negus ninjas from here and machete wielders from there or anywhere, wild (wo)men at war without peace… by piece…. Guabancex against the government, Conquering congress, co-optation and colonization yesterday (today), always arm and arm, with all the arms they/we would ever need. They became Machetero(s) and we became and remained harder than a hurricane!